My report is not as geological as the other two made their report, but I thought we had to make some sort of a touristic informative journal. Or at least something for the public in order for them to get in touch with the geological background of the area.

I think my report is at least a bit funny, so please enjoy yourself while checking/reading.

Please, send my regards to your colleague Philippe Lambert, as I want to thank him for the effort he made for our sakes.

A brief introduction to the impact crater of Rochechouart

Despite all the pretty girls and handsome boys in Rochechouart, the small-sized city in the province of Nouvelle Aquitaine has a lot more to offer to tourists. One of the major tourist attractions in this region is the impact crater of Rochechouart. It might not be obvious to many, but the Rochechouart and the surrounding region contains an awful lot of evidence for an impact that happened about 210 million years ago in a region that was already altered by the Variscan orogeny. Due to this impact, shock metamorphism mainly caused the formation of impact melt as it also triggered the brecciation and fractionation of the surrounding area up to 20 km away from the centre of the impact. The evidence of the impact crater roughly considers the consequences of shock metamorphism and the occurrence of impact melt rock, suevites and polymict breccia; which are all rock types created by an impact; in the region.

A first encounter with this peculiar past is at the quarry of Champagnac. Over here, the impact gave birth to impact breccia; which is a rock type consisting of angular clasts and a matrix; as well as impact veins; comprised of carbonate, silicate or amphibolite due to pressure dissolution. Folding  occurred concurrently with  brecciation, as a result of the impact. Furthermore, a fluid-like deformation due to the formation of impact melt is visible. 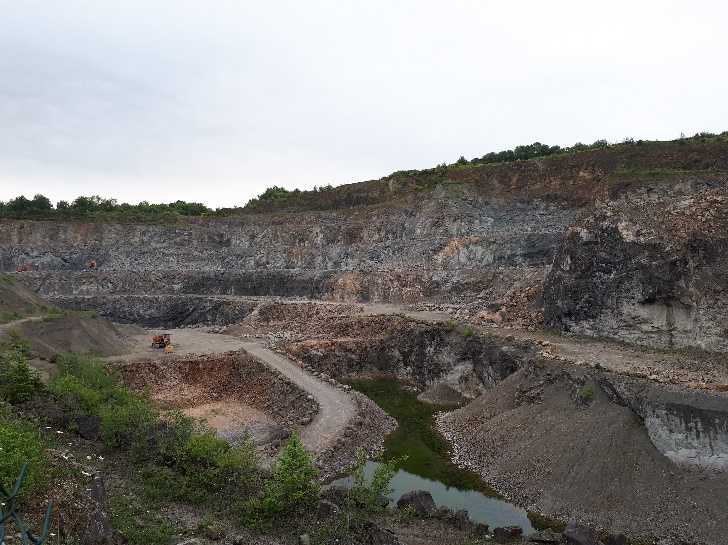 1. The quarry in Champagnac

Near the village of Chassenon, there is a chance to visit the Gallo-roman therms. If there is, do not waste the opportunity of dressing like a full-fledged Roman in this outstanding museum. Besides, once you take a leap through time, you should go further down the road into the heather. On first sight, nothing seems out of the ordinary. However, the place once was a Roman quarry, where suevites were exploited. Though, in the middle of the quarry a lens made out of impact melt was left untouched. This might be due to the differences in visible characteristics of the two rock types as the Romans might have liked building with uniform bricks better. The lens of impact melt is visible in the landscape as a hill overgrown by trees and bushes. 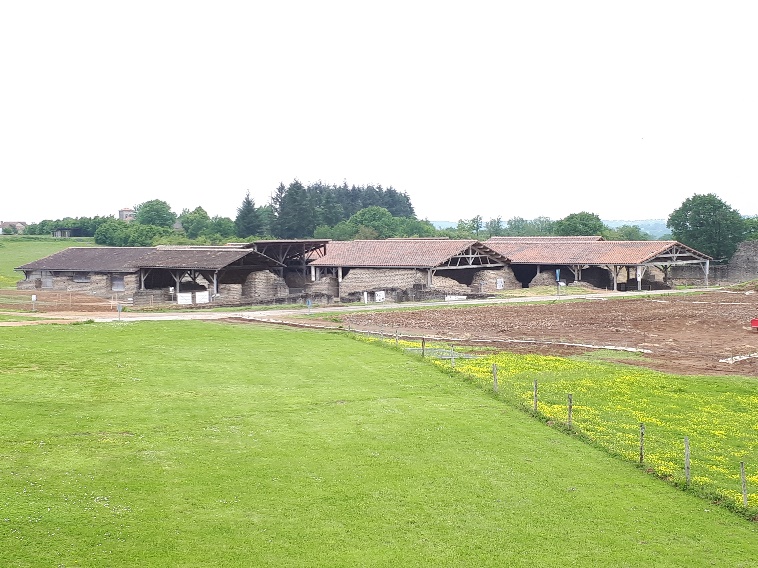 2. The Gallo-roman therms near the village of Chassenon

And if you are really keen on history, there is another quarry in the county of Chassenon. This quarry is located on the field of a local farmer, so please ask the owner before going. History has shown that fawn mistakenly fall into the open pit, making a deadly plunge. This cow cemetery is positioned on the border of shatter cones; rocks with striations; and overlying impact breccia. Both rock types indicate the occurrence of a meteor impact. On a side-note, if a shatter cone is desired for indoor or outdoor decoration, a basic search on the internet might be satisfying. Though, beware for imitates and stolen goods. 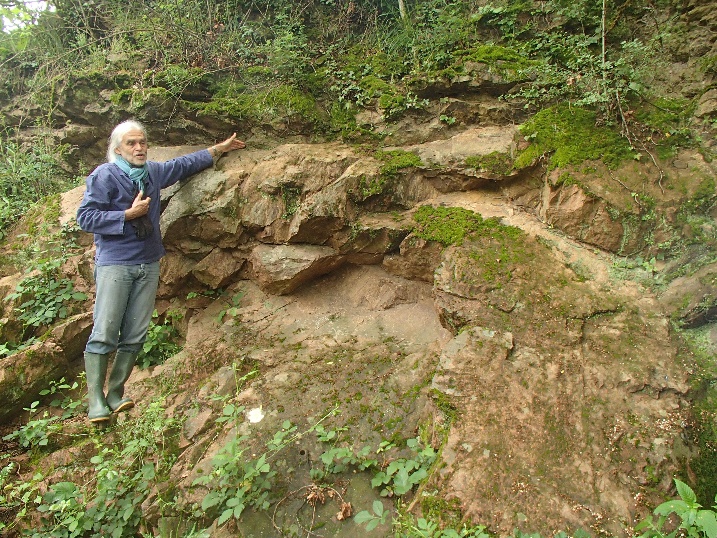 3. The quarry near Chassenon where countless fawn came to die gruesome deaths. Shatter cones are visible in the rocks

Perhaps taking a walk sounds like a wonderful idea. Finding the perfect location for a nice afternoon stroll is like a walk in the park. As such, there is the area around Pressignac-La lande. Taking the unpaved roads leads you to the most astounding landscapes. While hiking through nature, encountering formations containing brecciated gneiss, polymict breccia, suevites and/or other rocks generated by the impact is not out of the question. If you do, be sure to take a look at this rare phenomenon.

4. Outcrop next to one of the many unpaved roads, containing gneiss and monolithic breccia.

Does the countryside no longer seem interesting? Maybe it is time to explore one of the many medieval villages or small towns. Once back among the living, make sure to note the houses and some streets are entirely made up  of rock types found in the surrounding areas. These rock types do also contain traces of the past as they mainly are the impact melt rocks, suevites and polymict breccia previously spoken of.

Lastly, did this rural and medieval region truly melt your heart? Well, so did the meteor impact 210 million years ago with the region. Remnants of the impact melt can still be found in and around settlements. For instance, in Rochechouart both a yellow impact melt and a red impact melt can be observed at the foot of the castle. It is fascinating how the colour of the melt changes rapidly over such little distance. However, do not forget to set foot in the castle, this unique place will lift the blanket lingering over the mysterious history of the place. 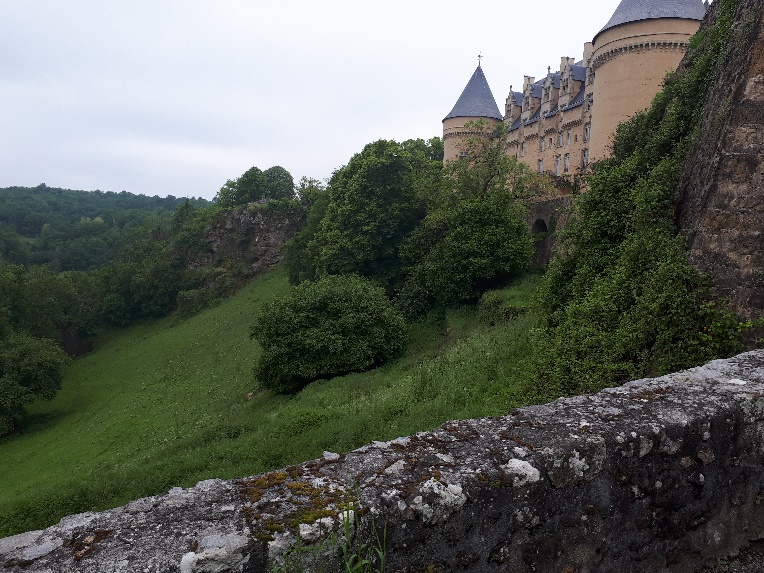 5. The Rochechouart castle standing on top of both yellow impact melt and red impact melt.

Getting hungry yet? It is time to go and search for some food. There are a lot of taverns, pubs and restaurants serving exquisite dishes in the region. If your budget does not allow the expense of going to a restaurant or if you are a backpacker who would love to stay true to the ways of a true hitchhiker, there is the possibility to buy some food and drinks in a supermarket or you can get a meteor or a comet in one of the many local bakeries. 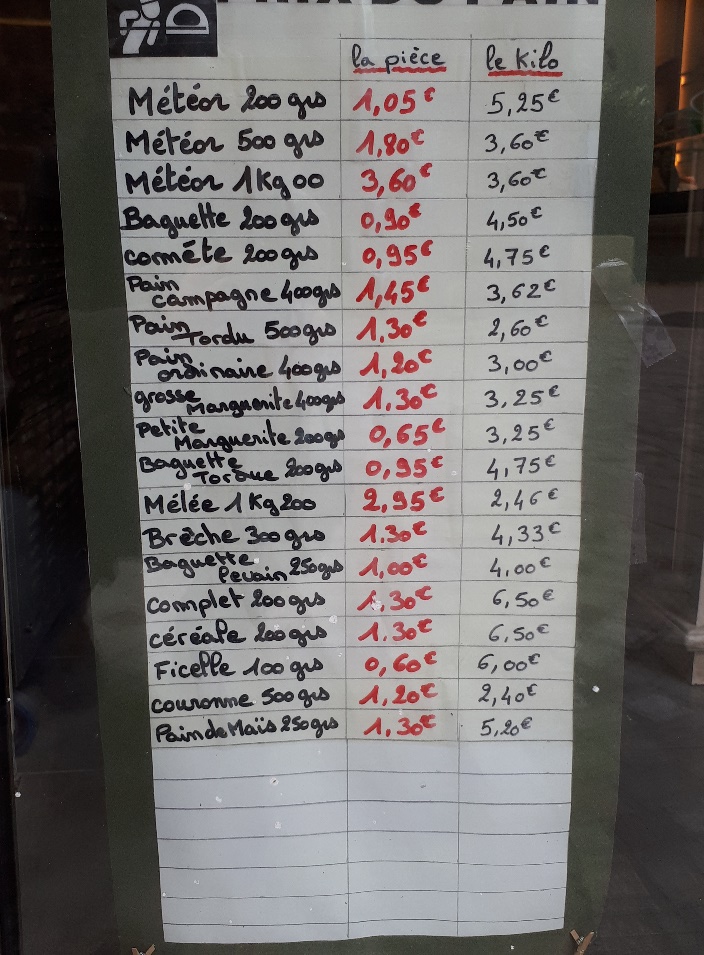 6. The list of bread sold in one of the local bakeries of Rochechouart.

Are you excited yet and thrilled for some more information of the region? Do not hesitate to contact Philippe Lambert on Lambertbdx@gmail.com.

If the region is not entirely what you are looking for or you still want more exciting sightseeing, San Francisco might do the job. Be sure to look for the man with flowers in his hair. He also knows a lot about meteor impacts. 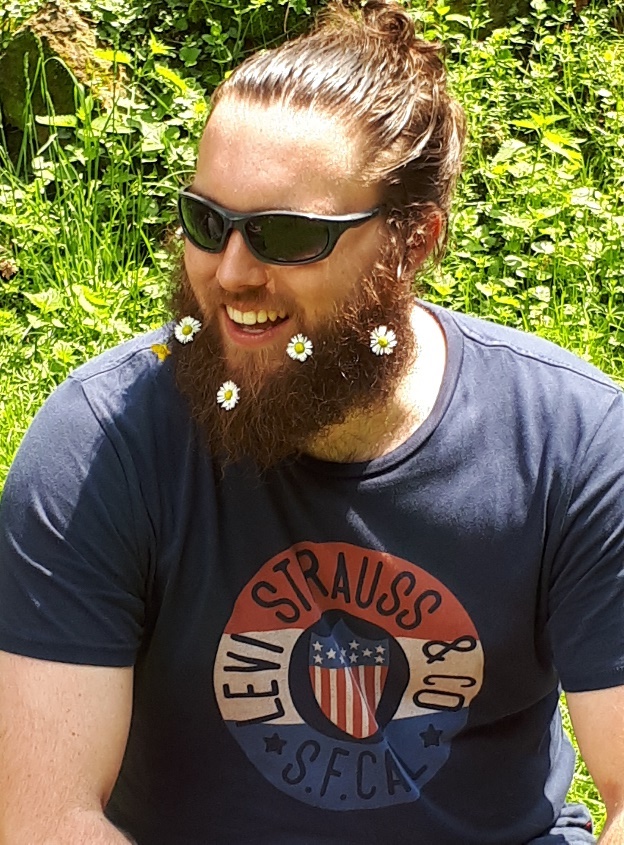 7. Thomas, one of the researchers of the Rochechouart impact crater during the field trip of May 2018. By many he is also known as the man with flowers in his hair.

I am a student at Cheikh Anta Diop University, in Dakar. I started in 2017 a PhD thesis on impact craters (https://bambaniang.wordpress.com/). I am probably one of the first doctoral students in West African geology departments trained in this field. I benefit from the advice of a supervising team composed of specialists in the field (including David Baratoux, Uwe Reimold, and Sylvain Bouley) as well as the momentum generate by the Africa Initiative for Planetary and Space Sciences (http://africapss.org).

As part of this thesis, I had the opportunity to participate in the drilling campaign of the Rochechouart impact structure, in France. The impact structure has been known for more than 50 years but has remained relatively unexplored compared to comparable objects in other parts of Europe or North Africa.

All our current knowledge is based on the investigations of Professor François Kraut and to a large part of Dr. Philippe Lambert, who defended his thesis in 1977, on the study of this impact structure, and who is also at the origin of the CIRIR and of the drilling campaign funded by the Reserve Naturelle de l’Astroblème de Rochechouart Chassenon. Thus, the drilling campaign marks the beginning of a new era of scientific research on this unique impact structure in France and opens exciting new perspectives for the international scientific community. It has been successfully conducted and has produced unrivalled sampling of the impactites formed during a 200 Ma cataclysm. These samples will soon be made available to scientists in France and internationally, which will allow both to elucidate the outstanding scientific questions related to the impact of Rochechouart, but also to better understand impact processes in general and their fundamental consequences on the evolution of the planets and on life. I also hope to work soon on these samples!

Personally, my best memory has been an encounter by chance. As I was walking in the field using my handheld spectroradiometer, and near a site being drilled, a remote site deep in the woods, I met an 85-year-old lady, Mrs. Solange Boulesteix. Attracted by the sound of the machine, she asked me if it was related to “the history of the meteorite”. I answered that it was a drilling campaign to better understand the impact structure. I was astonished when she told me that she had met 50 years earlier Pr. François Kraut, which allowed his team to discover in the Pré du Roc at Fontceverrane a rock of microgranite with shatter cones, considered to be an undisputable evidence of the meteoritic origin of the Rochechouart structure. A sign of destiny? I hope to be back soon at CIRIR to carry out my measurements of potassium, thorium and uranium concentrations in the Rochechouart impactites and thus contribute to the understanding of the consequences of such phenomenon on the Earth’s crust.